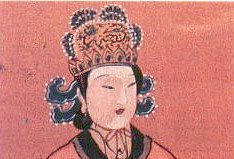 Wu Zhaou or better known as Wu Zetian the only empress of China was born in Wenshui in 624 in Shanxi province. She was born to a family of high rank which aided her in her reign by allowing her to move through the ranks more easily.

Wu Zetian was known to be a prolific leader, which helped her gain a wider view of political affairs and helped her understand the empire’s ranking system.

She became Emperor Taizong’s concubine at the mere age of 14. She was praised for her beauty and literary talents; however, because of her young age, she had a colossal amount of knowledge to acquire about the world awaiting her.

After the death of Emperor Taizong, Wu Zetian was sent to a temple where she was to serve the rest of her life as a Buddhist nun. Soon after, however, the new emperor’s mother conspired against the consort of the palace and brought in Wu Zetian to serve her son instead.

However, being named empress did not guarantee her power. So after the officer of state affairs had fallen ill, Zetian took the lead to remove both of her sons from the consort and deem herself the only one able to rule.

She became Empress in 690 CE and the first woman to rule during the Tang Dynasty. Through constant doubt and questions about her competency, Zetian showed reliance and the dynasty prospered. Under Wu Zetian’s rule, the Silk Road opened, propelling Middle Asia together as trading partners.

Wu Zetian died at the age of 82 in 705 AD due to old age. Empress Wu Zetian opened the eyes to not only China but to women all over the world, showing them women could be in power and use that power to uplift others by being willing to take risks.

“Women’s history month is to celebrate the accomplishments of women around the world who have taken risks in bettering our society. I also believe it’s a time to acknowledge the suffrages throughout history that women have endured. Both aspects help us recognize how far we have come and guide us into making more efforts towards women empowerment,” junior Angelina Pamatian said.