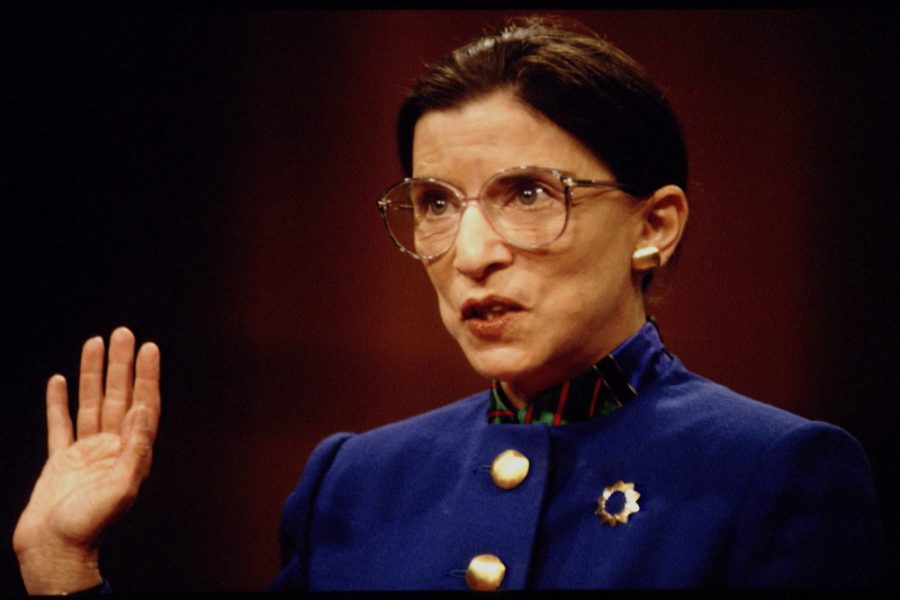 Ruth Bader Ginsburg was born on Mar. 15, 1933, in Brooklyn, New York. She was the youngest of two kids, but her older sister passed away at the age of six when Ginsburg was only 14 months old. She grew up in a low-income, working-class area, and her family was Jewish and attended synagogue.

Ruth’s mother heavily encouraged her studies and success in school, taking her to the library every week.  Ginsburg was taught the value of knowledge and independence and the importance of a good education. Ginsburg graduated from James Madison High School, where she excelled in her classes. On the day Ginsburg graduated, her mother passed away. After high school, Ginsburg then went on to study at Cornell University and graduated in 1954. That same year, she married her husband, Martin D. Ginsburg. They had their first child, Jane, right before Martin was drafted, and he served a two-year service before being discharged. Both then enrolled to study in Harvard’s law program.

At Harvard, Ginsburg faced a hostile, male-dominated atmosphere with very few women in a class of hundreds of people. The women were faced with harassment from the dean at the time for taking the places of “other, qualified men.” Ginsburg balanced her life as a mother and as a student, but pressed on and became a member of the Harvard Law Review journal. In 1956, her husband contracted testicular cancer, so Ginsburg then took on the responsibility of taking care of both her daughter and Martin. She took notes for him in his classes, while also still attending to her own studies.

After college, Ginsburg transferred to Columbia Law School, and joined their school’s law review as well, graduating first in her class. Despite her outstanding education, Ginsburg still faced gender discrimination in the job field. In 1963, she taught at Rutgers University Law School and then became the first tenured female professor at Columbia.

In 1972, Ginsburg founded the ACLU’s Women’s Rights Project, an organization to empower women facing gender discrimination and equality barriers in society. Ginsburg was dedicated to equal gender rights in America and argued that the law was gender-blind.

She argued six cases before the US Supreme Court and then was appointed by President Bill Clinton to fill the seat that was vacated by Justice Byron White. She also most notably fought for the separation of church and state and workers’ rights and won the Thurgood Marshall Award for her contributions to civil and gender rights.

On Jun. 27, 2010, Ginsburg’s husband passed away from cancer. They were married for a total of 56 years, and she described him as “the only young man I dated who cared that I had a brain.” Then on Sept. 18, 2020, Ginsburg passed away from metastatic pancreas cancer after serving on the US Supreme Court for 27 years. She became the second-ever female justice to serve on the Supreme Court, and the first-ever Jewish, female justice to serve on the Supreme Court. Her contributions as a strong voice for gender equality, separation of church and state, and workers’ rights will forever be remembered in America’s history.