The Cultural and Educational Importance of Foreign Language Classes

World language is more than just a graduation requirement 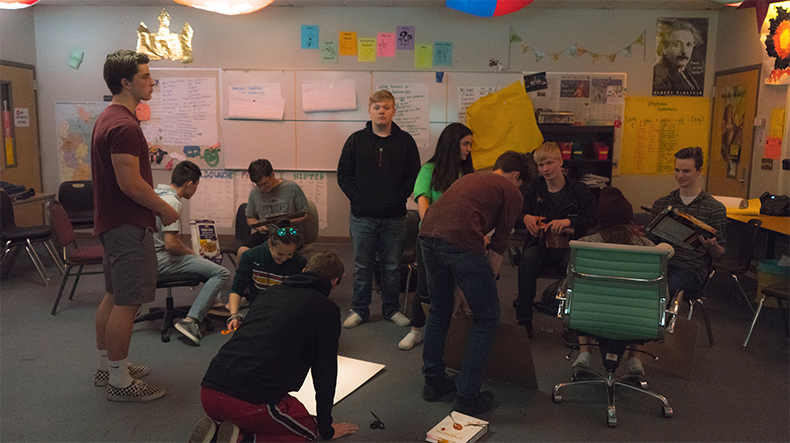 Technologie: German students craft computers and phones out of cardboard. German 2 classes were in their technology unit and focused on modern technology and its uses. “German class is super interactive. We do a lot of fun projects that relate back to whatever we’re learning that day,” junior Jeremy Ross said.

Many students dislike the fact that the state added a two-year language requirement to graduate at LSHS, due to the fact that they don’t find it important career-wise. Taking a language course may seem like a silly demand to graduate, but it actually has more benefits than one might think.

Taking a language class has cultural assets. It can help open up students’ mind to the lives of those in other countries, other continents. By exploring the cultures and everyday lives of people in other places, it helps one understand their way of life more than you would have before. Personally, I have taken two years of German and plan on taking two more. Understanding the cultures of German people through food or unique German Holidays is so interesting and fascinating to me. I’m sure the same could be said about people taking Spanish and French, or other languages that aren’t offered at Lake Stevens. Culture is a huge part of language classes and one of the largest learning points throughout the school year.

Language courses also have educational benefits. Taking three or more years of language in high school looks great on college applications, and makes applicants more likely to get accepted. Some colleges even require more than two years and exceed high school graduation requirements. It also helps students avoid having to take world language on a college level, which is more challenging because the pacing is twice as fast.

Knowing or possibly being fluent in a language can also help graduates get a job. Many careers require someone who is bilingual or trilingual, such as helping translate in meetings with two different-speaking people. By speaking another language, it opens up an entire world of job opportunities someone may not have had before. It gives people options that others would not have.

Honestly, learning a language is just fun. My favorite class of my two years of high school has been German. It’s brought me closer to peers I never would have thought I would be friends with. Learning something so special and significant with others is truly unlike anything else, and brings students closer together. Both my years of German class, I have felt as though we are a family. I would also like to say that my teachers of both years have been my most supportive, encouraging teachers I have ever had.

As a sophomore in German 2, I was scared I would feel left out and excluded from the class. Everyone else is either a junior or senior, and that intimidated me. But it was quite the opposite. They took me in and helped me understand this new learning environment I had never been in. As a new student to the district, this made me feel not so lonely at the school, like I had other students I could go to for help. Without this German class, this group of students randomly selected to be in a fifth period German 2 class, I don’t think I would be doing as well as I am doing at a new school. It’s what keeps me going through the day, the one thing I look forward to in the school day.

Whether a language class helps people get into a good school or make new friends, these courses are more beneficial than they are given credit for. The opportunities given from learning a language are almost unbelievable. Is it worth it to take more than two years of language? I would say yes. It’s done numbers on my life, and could possibly do the same for others.