LSHS student show off their talents for the student body 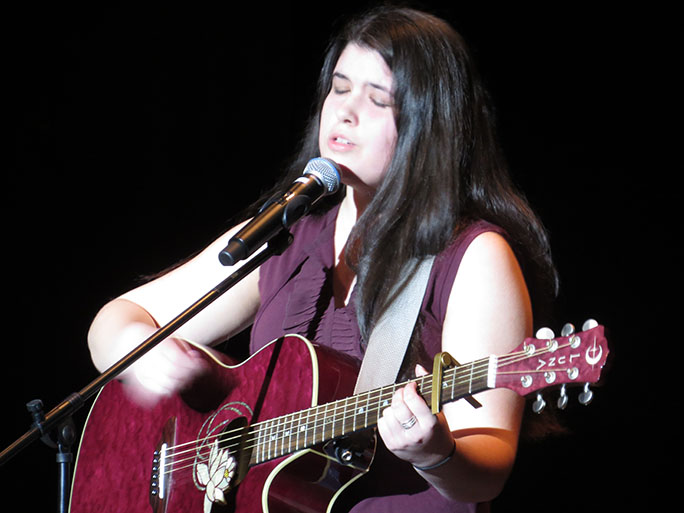 Winner of 2017 Talent Show Madi Gillbert with her original song called “Phoenix”. As well as singing an original, she played the guitar too.

At Lake Stevens High School, we have a talent show to showcase the talent we have within our student body. There is so much talent at our school and some don’t even know it. Some of the talents that were showcased were hip hop dancing, singing, guitar playing, cello and tap dancing. Although there were so many great acts, there can only be one who can be the first place winner.

How could someone decide out of so many acts, to find just the right one? Well, the Valhalla got to ask that same question to see what one of the judges said. The judges were Mr. Proff, Ms. Helman, Mrs. Ivelia, and Sydney McDermott.

“I got to see another side to them that I didn’t see in their character,” Principal Leslie Ivelia said.

As the acts went on, the hosts of the talent show, senior Noah Wallace and junior Nick Peńa, made the crowd laugh with their jokes. There were many acts to see and they had to get the crowd pumped for each of the talents. There were eleven acts to watch.

Each act was amazing to watch, and each one had  meaning to the performer. Hip hop dancer Jennaka Taton danced to “Dance Off” by Macklemore.

“Well it is so natural to me and so it couldn’t fail. I am very confident in my dancing,” junior Jennaka Taton said.

After Jennaka Taton surprised the audience with her freestyle hip hop dancing. The acts continued on.

“We don’t have an orchestra and I thought it would be unique to do,” senior Danial Leath said.

Although Lake Stevens High School does not have an orchestra, Danial took his talent and performed the song “Music of the Night” from Phantom of the Opera.

After all the performances were done, the hosts of the talent show gave the judges time to decide who was the winner of this years talent show. As the judges came to the decision, they decided to announce sophomore Madi Gillbert to be the 2017 talent show winner with her original song she wrote, “Phoenix”.